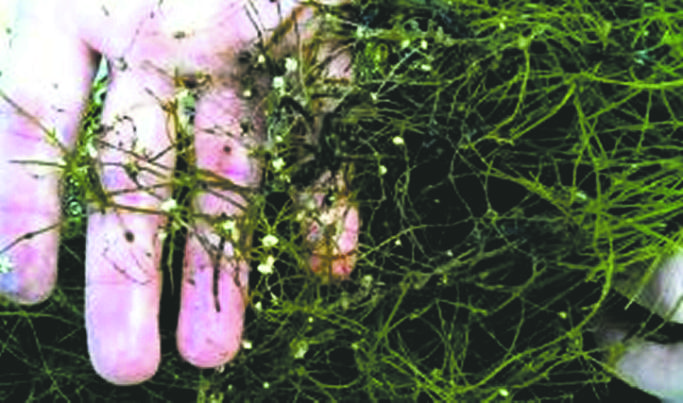 Starry stonewort has spread to 17 lakes and the Mississippi River. 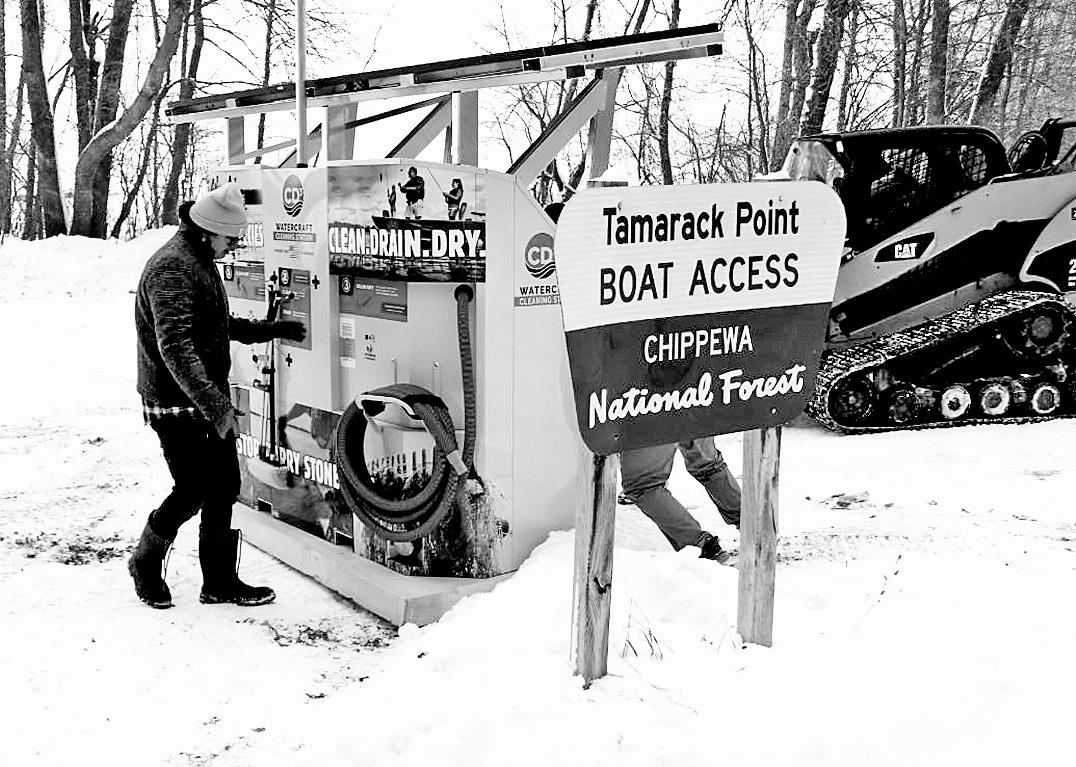 It’s out there now, growing under the ice. By the state’s official count, the algae has spread to 17 lakes and the Mississippi River since it was first discovered in Minnesota on Lake Koronis in 2015.

“It just kind of falls to the bottom,” she said.

Even as the snow flies, a new effort is underway to contain the destructive invasive species, as crews in Cass County last week installed four new boat decontamination stations on Lake Winnibigoshish and Cass Lake .

They’re the first of 28 selfservice boat cleaning kiosks going in around the state, part of a “Stop Starry” project to control the algae.

The rest will be deployed by spring “so that they’re ready to go for open water,” said Jeff Forester, executive director of Minnesota Lakes & Rivers Advocates. They’ll be installed on infested lakes in Beltrami, Itasca, Meeker, Stearns, Pope and Wright counties.

Forester’s group bought the cleaning stations with a $1 million grant from Minnesota’s lottery-funded Environment and Natural Resources Trust Fund, and it’s giving them to local groups and governments to install.

“I think it will definitely reduce the risk,” Forester said.

Nicholas Phelps, director of the Minnesota Aquatic Invasive Species Research Center, agreed. It’s still early in the invasion, he said. Boat-cleaning stations aren’t new, but there aren’t enough and the state has historically relied on an army of watercraft inspectors standing on the shore, he said. That leaves gaps in the system. Having decontamination equipment on targeted lakes complements the state’s large watercraft inspection program, he said.

“This is the first time where on a larger statewide scale they’re trying to tackle a specific species in this way, and I think that’s great,” said Phelps.

Heidi Wolf, Invasive Species Program supervisor for the Minnesota Department of Natural Resources , applauded the project. There are already about 50 cleaning stations around Minnesota. The DNR owns another 23 portable, hotwater decontamination units that inspection staff operate, Wolf said. In addition, weed removal equipment made by Darwin-based Aqua Weed Stick is installed at about two dozen locations.

It’s not much, considering the extent of the problem.

Starry stonewort is the latest aquatic invasive, joining zebra mussels and others. It’s said to have hitchhiked to Minnesota in the ballasts of ships on Lake Superior. The algae sports a tiny, pearly, star-shaped bulbil, which is a reproductive organ that grows new plants.

In North America, all starry stonewort is male and reproduces on its own.

The algae can be treated with herbicides, but it’s not very effective and gives it only a haircut, Wolf said. One of the most successful efforts has been a project in Stearns County’s Grand Lake, where scuba divers yank out the algae by hand.

“Can we get to eradication? Nobody knows that right now,” she said.

The new kiosks being installed are made by St. Paul-based CD3, whose name comes from the motto: Clean. Dry. Drain. Dispose. Manufactured in Princeton, Minn., the stations are solar-powered, waterless and equipped with lights, high-pressure air hoses to blow out boat lines, vacuums and scraper tools to help clean the average fishing boat on a 10-minute timed cycle.

They’re free to use.

The next step, Forester said, is years of organizing in communities to encourage watercraft cleaning and create a “civic pride” around it.

“The laws are in place,” Forester said. “People are supposed to be doing this anyway.”

Not everyone is convinced that the cleaning stations are up to the task. Valerie Brady, an aquatic ecologist at the University of Minnesota’s Natural Resources Research Institute in Duluth, is starting a study to determine how effective they are, in cooperation with CD3.

She said inspections focus too much on the outsides of boats, and not enough on the insides. Duck hunting really mucks up interiors, she noted.

Hagsten, in Cass County, said she’s optimistic. At the same time, she said, she is concerned about the algae’s impact on local wild rice beds.

Starry stonewort has been found in wild rice stands, she said, but it’s not clear how the rice has been affected. The invasive plants can change water’s acidity, something wild rice is sensitive to. Plus, dense mats of starry stonewort choke out other plants.

There is concern the algae could affect the ability of wild rice to germinate, Hagsten said. That could be devastating since wild rice is a sacred plant for the Ojibwe people, part of the tribe’s migration story and one of its main food sources. Tribal scientists and the U are collaborating to study the problem.

“The importance of the work is almost unmeasurable on a sociological level,” Hagsten said. “The presence of wild rice on the landscape and the process of harvesting it is a core of the local Indigenous peoples’ health and identity.”