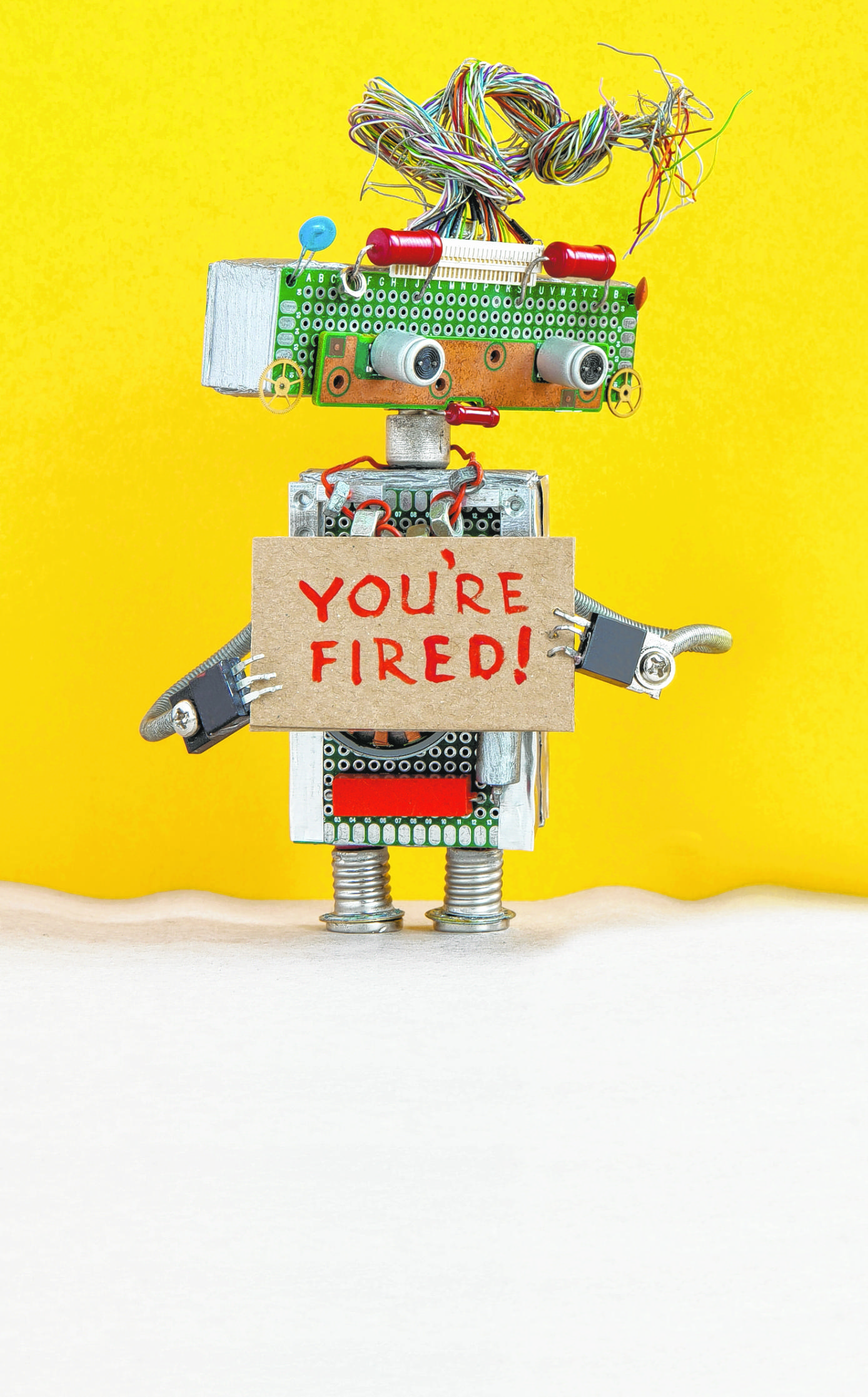 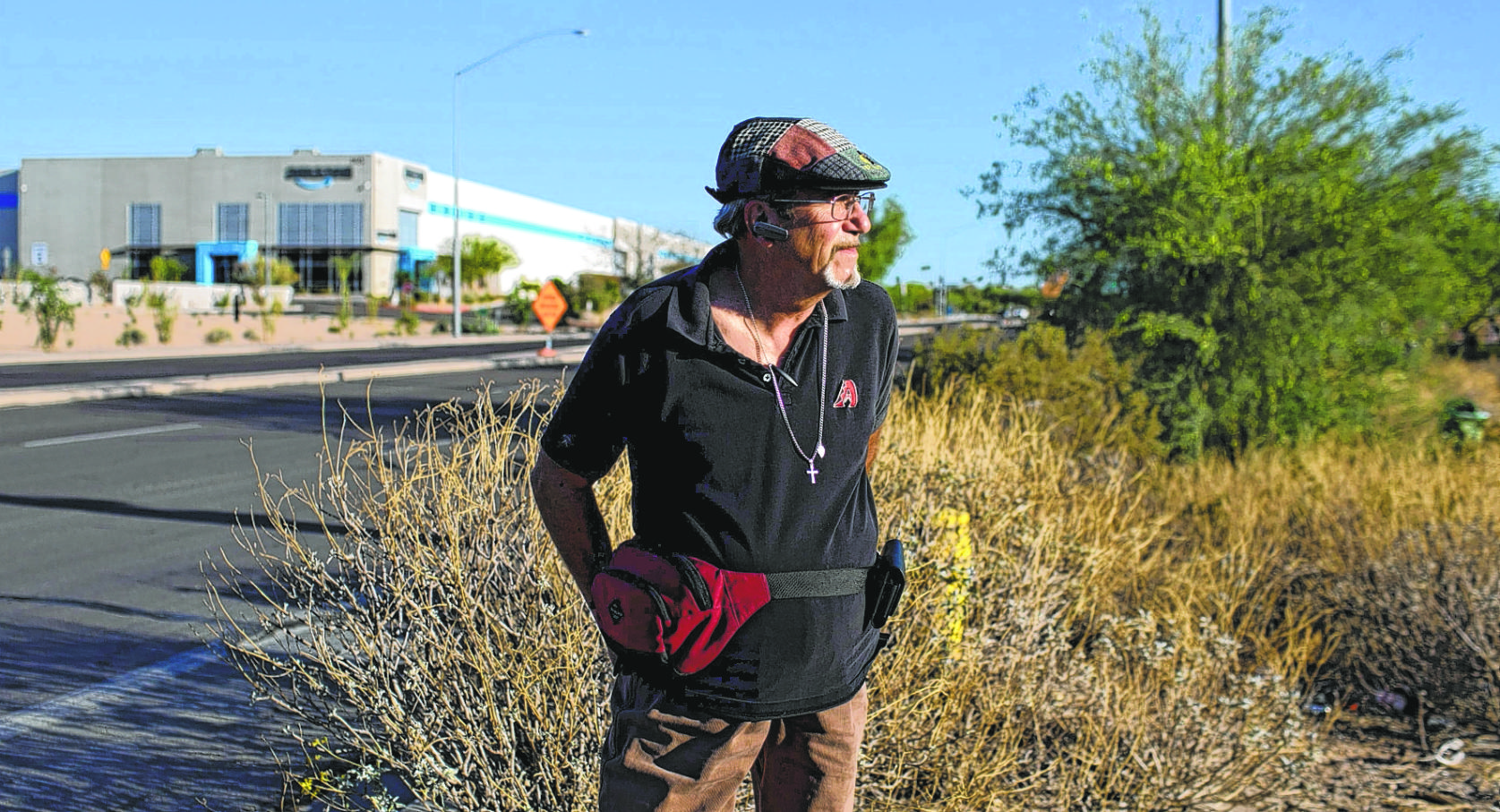 “I’m an old-school kind of guy, and I give every job 110%,” said Stephen Normandin, who delivered packages in Phoenix until he was fired via automated e-mail. “This really upset me because we’re talking about my reputation. … There are a lot of things the algorithms don’t take into consideration.”
PREVIOUS IMAGE

“Whenever there’s an issue, there’s no support.

It’s you against the machine, so you don’t even try.”

Stephen Normandin spent almost four years racing around Phoenix, delivering packages as a contract driver for Amazon.com Inc. Then one day, he received an automated e-mail.

The algorithms tracking him had decided he wasn’t doing his job properly.

The 63-year-old Army veteran was stunned. He had been fired by a machine.

Normandin said Amazon punished him for things beyond his control, such as locked apartment complexes, which had prevented him from completing his deliveries. He said he took the termination hard and, priding himself on a strong work ethic, recalled that during his military career he helped cook for 250,000 Vietnamese refugees at Fort Chaffee in Arkansas.

“I’m an old-school kind of guy, and I give every job 110%,” he said. “This really upset me because we’re talking about my reputation. They say I didn’t do the job when I know … I did.”

Normandin’s experience is a twist on the decades-old prediction that robots will replace workers. At Amazon, machines are used for hiring, rating and firing thousands of people with little or no human oversight.

For years, the company has used algorithms to manage the thousands of third-party merchants on its online marketplace, drawing complaints that sellers have been booted off after being falsely accused of selling counterfeit goods and jacking up prices.

Increasingly, the company is using software to manage workers in its warehouses and oversee contract drivers, independent delivery companies and even the performance of its office workers.

Amazon started its gig-style Flex delivery service in 2015, and the army of contract drivers quickly became a critical part of the company’s delivery machine. Typically, Flex drivers handle packages that haven’t been loaded on an Amazon van before the driver leaves. Rather than making the customer wait, Flex drivers ensure the packages are delivered the same day.

They also handle a large number of same-day grocery deliveries from Amazon’s Whole Foods Market chain. Flex drivers helped keep Amazon humming during the pandemic, and many earned about $25 an hour shuttling packages after their Uber and Lyft gigs dried up.

But the moment they sign on, Flex drivers discover algorithms are monitoring their every move. Did they get to the delivery station when they said they would? Did they complete their route in the prescribed window? Did they leave a package in full view of porch pirates instead of hidden behind a planter as requested? Amazon algorithms scan the gusher of incoming data for performance patterns and decide which drivers get more routes and which are deactivated. Human feedback is rare. Drivers occasionally receive automated e-mails, but mostly they are left to obsess about their ratings, which include four categories: Fantastic, Great, Fair or At Risk.

Bloomberg interviewed 15 Flex drivers, including four who said they were wrongly terminated, as well as former Amazon managers who said the largely automated system is insufficiently attuned to the realworld challenges drivers face every day. Amazon knew delegating work to machines would lead to mistakes and damaging headlines, these former managers said, but decided it was cheaper to trust the algorithms than pay people to investigate mistaken firings so long as the drivers could be replaced easily, they said.

Inside Amazon, the Flex program is considered a great success, whose benefits far outweigh the collateral damage, the employees said.

In a statement, Amazon spokeswoman Kate Kudrna called drivers’ claims of poor treatment and unfair termination anecdotal and said they don’t represent the experience of the vast majority of Flex drivers.

“We have invested heavily in technology and resources to provide drivers visibility into their standing and eligibility to continue delivering, and investigate all driver appeals,” she said.

So far, Amazon has had no trouble finding Flex contractors. Globally, some 4 million drivers have downloaded the app, including 2.9 million in the U.S., according to AppAnnie.

And more than 660,000 people in the U.S. downloaded it in the first five months of this year, up 21% from the same period a year ago, according to SensorTower, another app tracker.

As independent contractors, Flex drivers have little recourse when they believe they have been deactivated unfairly. Drivers can pay $200 to take their dispute to arbitration, but few do, seeing it as a waste of time and money.

When Ryan Cope was deactivated in 2019, he didn’t bother arguing or consider paying for arbitration. By then, Cope had already decided there was no way he could meet the algorithms’ demands. Driving miles along winding dirt roads outside Denver in the snow, he often shook his head in disbelief that Amazon expected the customer to get the package within two hours.

“Whenever there’s an issue, there’s no support,” said Cope, 29. “It’s you against the machine, so you don’t even try.”

An Amazon customer has no idea what obstacles Flex drivers encounter on the way to their residence, and neither do the algorithms clocking them. One driver said sometimes so many drivers were lined up outside the delivery station that she waited as long as an hour to retrieve her packages, putting her behind schedule before she even started her route. The computer engineers who designed Flex worked hard to make it fair and consider such variables as traffic jams and problems accessing apartments that the system can’t detect, former employees said. But no algorithm is perfect, and at Amazon’s size even a small margin of error can be considered a huge success internally and still inflict a lot of pain on drivers. Amazon Flex drivers deliver about 95% of all packages on time and without issues, according to a person familiar with the program.

E arly on, according to a person familiar with the situation, designers set too tight a time period for drivers to get to the delivery station, failing to factor in human nature. Drivers eager for work would promise to arrive by a certain time when they were too far away to make it. The flaw set good drivers up to fail, the person said, and was fixed only after a widespread plunge in ratings. The system also uses GPS to decide how long it should take to reach a specific address but sometimes fails to account for the fact that navigating a rural road in the snow takes a lot longer than traversing a suburban street on a sunny day.